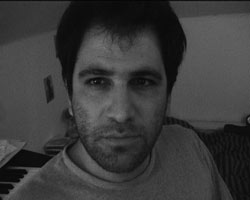 Panayotis Leftheris was born in 1966 and grew up on the Greek island of Kythera.  His deep love of music began in his childhood, when his devotion to  orchestral music disturbed the peace and quiet of winter afternoons for his neighbours.  Later, he took some piano lessons in Kythera from a Dutch expatriate, George Koksma, and from pianist Giannis Jonker in Athens.  He went on to study advanced theory of music with Joseph Papadatos, Panayotis Adam  and Giorgos Zervos.  He completed his formal music education in The Netherlands, where he studied composition with Luis Adriessen, Gilius van Bergeijk, Clarence Barlow, Diderik Wagenaar and Martijn Padding.  Afterwards he decided to return to his home village where, besides composing, he gives music lessons, organises concerts on the island, and runs an innovative yearly “Music Workshop” to which young musicians and composers come from all over Greece.  He has recently established the label “KYTHERIOS MUSIC”, enabling him to carry out independent productions. The energy needed to carry out these multifarious tasks, he insists, is derived from the landscapes and people of his island home.

Catelouso is the “nom-de-plume” of composer Panayotis Leftheris. It has also been his family’s nickname for the last four centuries. The root of the name is Italian (Gatteluso) and derives from the 600-year Venetian occupation of the island of Kythera.  Panayotis Leftheris has released his two «Kytherian» projects - «Sinaxis» and «Song of the Sirens» using this pen-name.  Both works were composed to honour the island and its inhabitants over the past centuries. They were commissioned by the Kytherian community and have been presented on various occasions, such as at the 8th International Pan-Ionian Conference (2006).